On 25th June 2019, Gorringe’s will be auctioning several Buddhist thangkas (paintings) - blessed by the Dalai Lama - amongst other relics, rescued by Tibetan children and their houseparents (the children’s guardians) during the 1960s upheavals in Tibet. All funds raised will help Pestalozzi to continue offering educational scholarships to young people from underprivileged countries.

A bit of background on Pestalozzi and its founders

In 1947, the British Pestalozzi Children's Village association was founded by Dr Henry Alexander - a German-Jewish refugee who moved to the UK before World War II - and Mrs Mary Buchanan, a British sociologist. In 1959 the organisation opened a 170 acre property in Sedlescombe, East Sussex to house and educate children from displaced persons camps in Europe at the end of World War II. In 1963, twenty-two Tibetan students, along with their houseparents, arrived at the village. 1967/68 saw the last of the European students at Pestalozzi and from that point on, students from Tibet, India and Nepal - amongst other countries - began to arrive.

A highlight of the collection going on sale at Gorringe's is a large Tibetan silk thangka of Buddha Shakyamuni, 'dragon' kesi borders (18th/19th century), with an estimate £2,000-3,000 (pictured below).

A number of the thangkas were blessed by the Dalai Lama who visited Pestalozzi on a few occasions from the 1960s onwards - quite the talking point for any would be buyer, adding further character and intrigue to the lots. 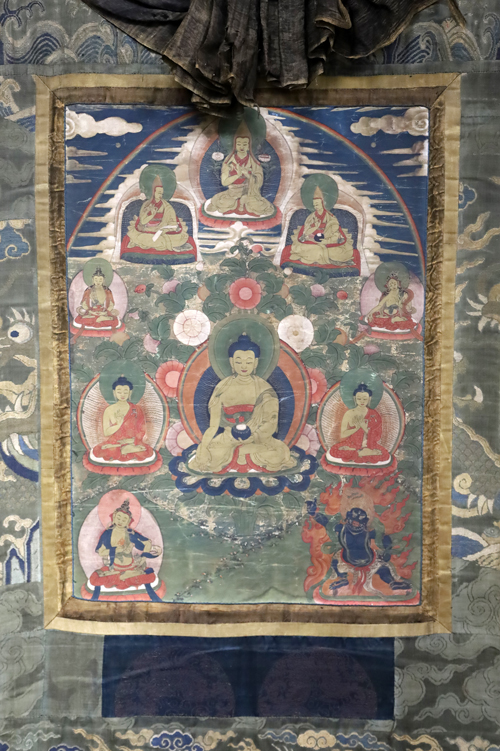 Video footage of the Dalai Lama visiting The Pestalozzi Village

In addition the collection includes a Chinese gilt and polychrome bronze seated figure of Buddha (17th/18th century), with an estimate £600-800 (Pictured below) and Buddhist figures of deities from China, Burma and Thailand. 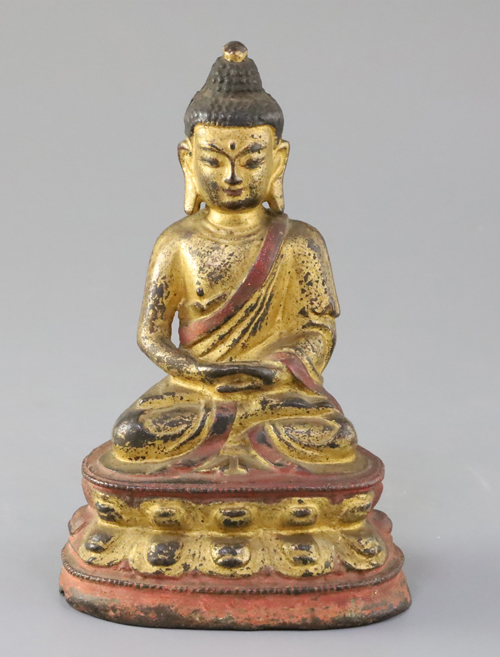 In line predominant style of most Buddhist art, thangkas are highly geometric in the main. Using grids, intersecting lines and angles, thangkas often utilise pre-designed items in their composition - such as animals and alms bowls - all fitting into the geometric design of a variety of ritual implements and elements from the human form (legs, eyes, ears, arms etc.) The process is very methodical, yet makes for some striking results, encapsulating the symbolism of Tibetan culture - and the tibetan spirit. 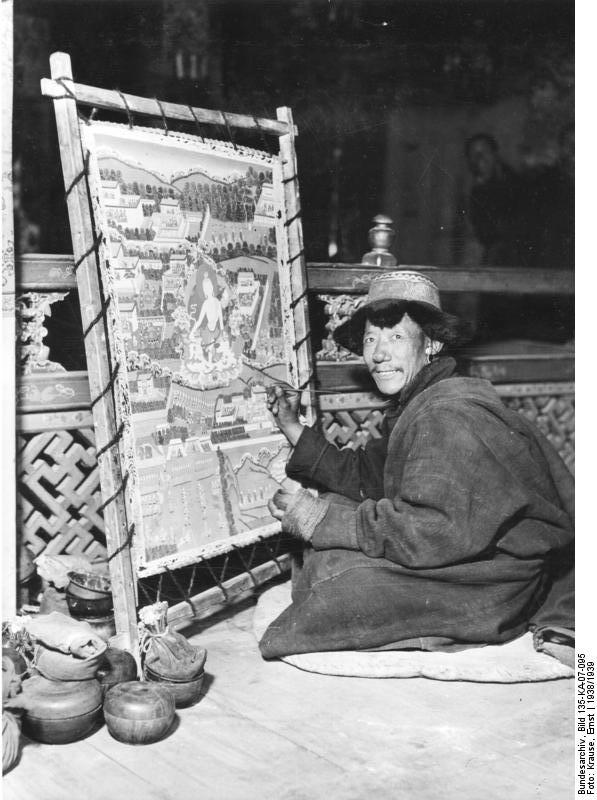 Thangkas are most commonly produced on cotton or silk. In producing thangka paintings, Tibetan artists set out in a methodical and linear fashion. Firstly, they would prepare the surface for painting, following this by laying out a design through sketch. Next came the primary coating of paint, refined in detail in the fifth step where outlining and shading was undertaken. Finally, the Tibetans artists would incorporate their finishing touches, to add further intricacies to the piece.

The Dalai Lama and thangkas 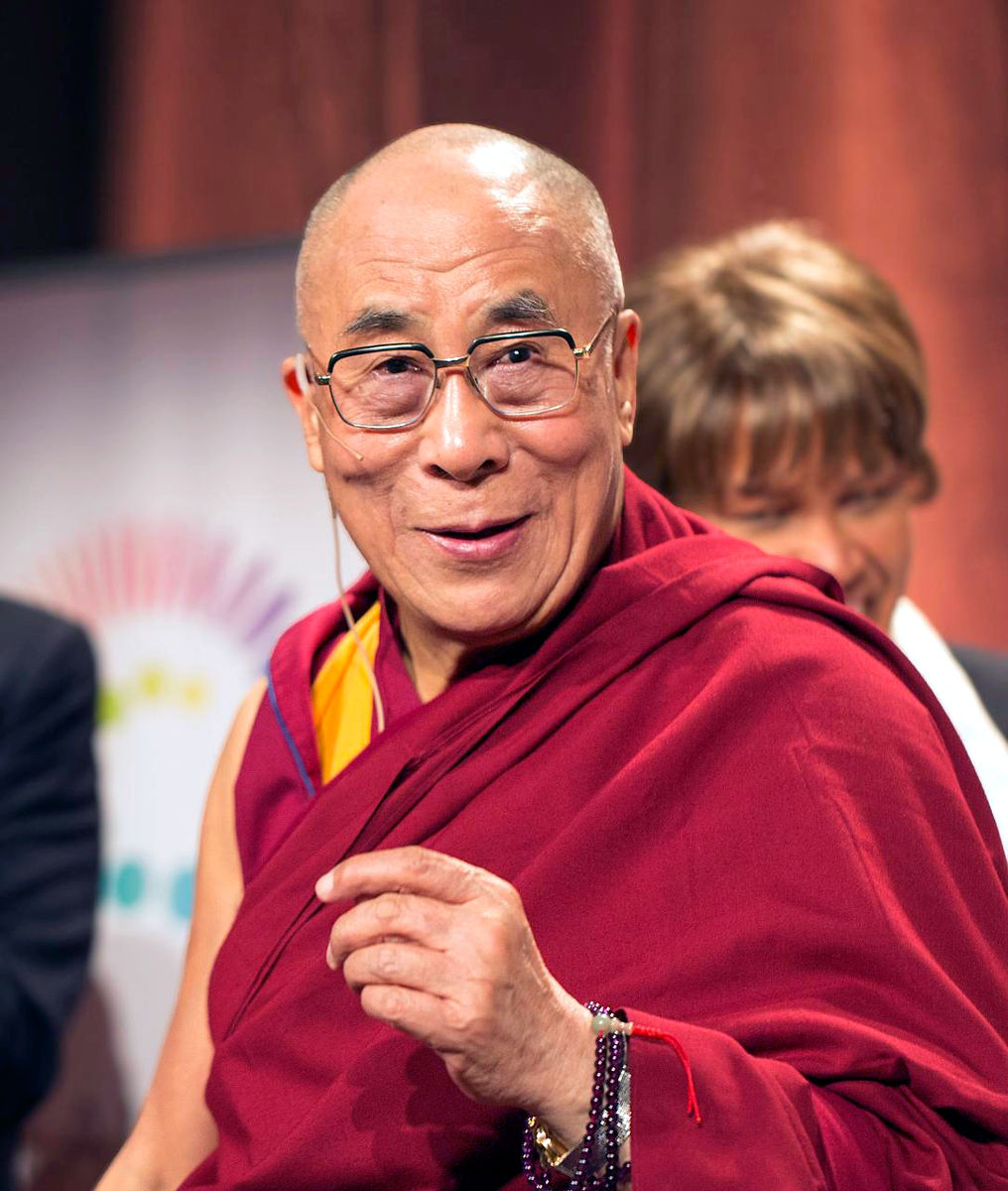 One of the most renowned Thangkas, Kalachakra Mandala, is said to have been designed by the Dalai Lama and is accordingly referred to as the Dalai Lama Mandala Thangka.

As mentioned above, the fact that the Dalai Lama has blessed the Thangkas going on sale in the Gorringe’s Summer Fine Sale is quite the story and sure to cause a stir amongst prospective buyers leading up to and on the day of the auction. Keep an eye on our Auction Dates page to be ready for when the lots go live, approximately ten days in advance of the Tuesday 25th June Summer Fine Sale.