Our Autumn fine sale features lot 766 from famed silversmith, Adrian Gerald Benney. The lot, which goes on sale at on Tuesday 1st October, is detailed below in the following blog article - telling you more about their maker and his incredible achievements in his field.

Who was Adrian Gerald Benney?

Benney was taught by Dunstan Pruden, the Roman Catholic ecclesiastical arts and crafts silversmith, between 1946 to 1948, at Brighton College of Art. During this period his work was initially influenced by the arts and crafts style of his teacher and later, for a brief period, by pre-Second World War modernism.

After military service, from 1948 to 1950, Benney studied at the Royal College of Art (RCA) and in 1952 a four-piece tea service and tray secured him the Prince of Wales Scholarship. In his last term at the RCA he purchased a plating business off Tottenham Court Road, as the premises were ideal for a workshop.

1969 saw Benney move his London studio to Falcon Wharf, Bankside and by 1973 warehouses in Bear Lane, Southwark. In 1974 he had to let most of his 19 staff go and moved everything to Beenham House, his home in Berkshire, where he stayed until 1998. He had one man exhibitions at Goldsmith's Hall in 1973, enamels in 1994 and another in 2005, three years before his death in 2008.

What set Benney’s designs apart from others?

Benney’s design and manufacturing skills were highly innovative. He was known for creating the “no scrap blank” which enabled items to be produced in vast swathes and subsequently without any waste.

He also created a special technique of silver texturing by using a bent hammer. This method eliminated fingerprints,  resulting in his signature “bark finish”. His skills as a businessman were also astute, ensuring royalty payments were made to him in ongoing production of his works and those influenced by him, something not usually associated with silversmithery.

Benney was the first British craftsperson to ever hold four Royal Warrants at the same time. Benney is renowned for the modern Scandavian style of his pieces, which he learnt through Berger Bergensen.

His commissioned pieces by royalty themselves include a blue bowl for The Queen and some keyrings for Princess Diana - although as Benney points out himself - he didn't actually get to meet The Queen!

He was given a CBE in the 1995 New Year Honours list and has even had a documentary made about him by the BBC, which you can watch below:

What of the Benney silversmith business now?

Adrian Gerald Benney’s son, Simon Benney, now runs the business and is also now recognised himself as one of the leading designers in the world. 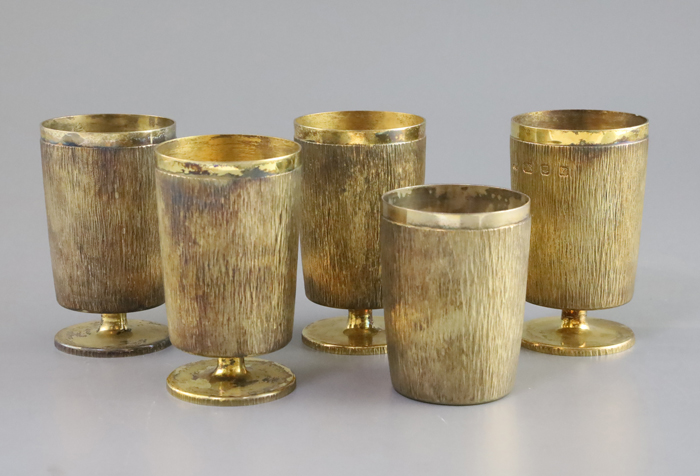