Gorringe’s June 3rd sale contains the cream of the musical instruments, equipment and records to have come through Gorringe’s doors in the past few months.

On the vinyl front we have the exceedingly rare 'Anno Domini' prog-folk album - ‘On This New Day’ - on Decca records. 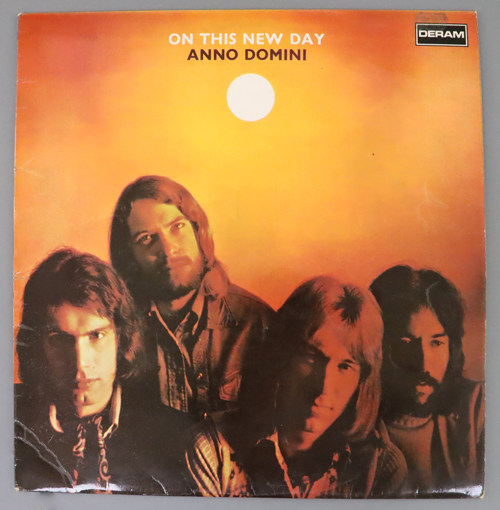 Anno Domini was formed by former Teddie & The Tigers and Eire Apparent guitarist, David ‘Tiger’ Taylor in Northern Ireland in 1970. ‘On This New Day’ is the band’s only LP and has been likened to Los Angeles band The Byrds in its influence - containing melodic and folk elements fused with fuzz guitar. The album is strong throughout, with its ‘showcase’ track being a cover of ‘So You Want To Be A Rock’n’Roll Star’.

Deram pressed records are much sought after because they represented a leap forward in record pressing technology at the time of their inception. In the 1960s, in an effort to improve stereo recordings, Decca recording engineers created a technique called "Decca Panoramic Sound." The term "Deramic" was created as abbreviation of this. The new concept allowed for more space between instruments, rendering these sounds softer to the ear. This is in contrast to early stereo recordings of popular music, which were usually mixed with sounds to the hard left, center, or hard right only, because of the technical limitations of the professional 4-track reel-to-reel recorders, which were state of the art until about 1967.

Bowie’s ‘Do Anything You Say’ up for auction on open market for first time since his death.

We’re also excited to announce that this sale will include a Pye promotional copy of David Bowie's first solo single - 'Do Anything You Say' - the first time it’s been available on the open market since his death. 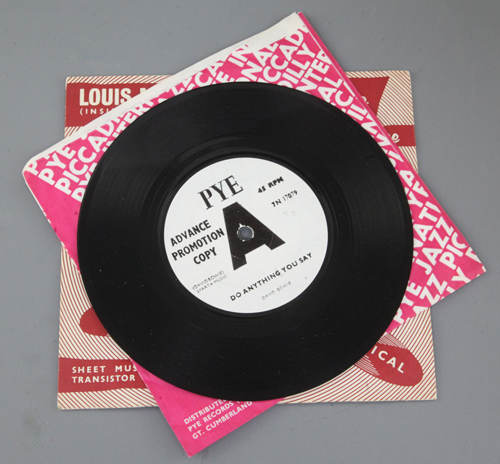 Originally released in 1966, despite featuring Bowie's backing band at the time, The Buzz, the single was to be the first single credited to David Bowie alone. Pye re-released the record in 1972 in an attempt to cash in on Bowie’s popularity achieved through the release of Ziggy Stardust.

We've also got a unique white label copy of Led Zeppelin's 'In Through The Out Door', hand annotated by Jimmy Page, with excellent provenance. 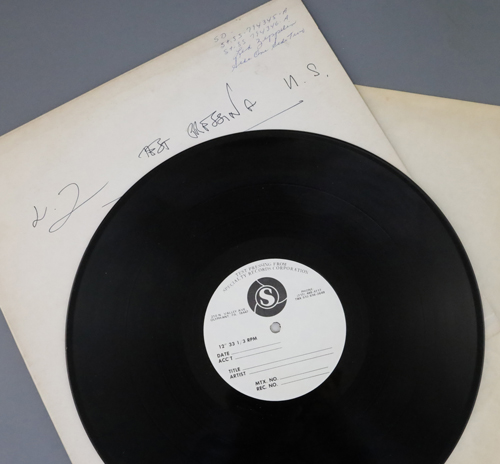 The album was Led Zeppelin’s eighth and final studio album - recorded in late 1978 in Abba’s studio in Sweden. In 1980, the band’s drummer, John Bonham, died - prompting the band to disband shortly after.

An interesting fact about the original ‘In Through The Out Door’ album revolves around its sleeve designs. The outer sleeve was made to look like a plain brown paper bag (reminiscent of similarly packaged bootleg album sleeves with the title rubber-stamped on it). Meanwhile, the inner sleeve featured black and white line artwork which, if washed with water, would become permanently fully coloured.

Take your music listening experiences to the next level

If you're looking for something to play those precious releases on, we'll have a selection of high-end audiophile turntables and a cleaning machine also available, being sold in tandem with an enormous quantity of cutting edge studio recording gear including a Neve preamp, Bricasti M7 reverb and several ribbon microphones.

For the first time we'll also be offering a large selection of modern guitars from the likes of Gibson and Hofner alongside more unusual pieces, such as a concert hammer dulcimer and a pedal steel guitar.

Here’s our music expert, Paul, taking you through some of the instruments on sale:

Below we list out all of the guitars on sale at the 3rd June auction, including a link to how they sound - as played by Gorringe’s very talented music expert, Paul.

This John Lennon version includes the ‘Inspired by John Lennon’ logo on the back and is a beautiful hollow bodied guitar, producing a lovely sound. Listen to the sound of the Epifone Casino E230TD guitar.

This is a mini stratocaster, converted in an electric mandolin. It comes with the original box it was stored in and looks like it has rarely been played. Features a sunburst three-colour design and, again, makes a fantastic sound that will give its new owner lots of pleasure. Listen to the sound of the Fendo Mando-Strat.

This acoustic guitar produces a gorgeous sound and is one of the two most eagerly anticipated lots in the guitar section of the  sale, for its rarity and sheer quality.  Listen here to the sound of the Vintage Gibson B-45-12. Estimate £800-£1,200. 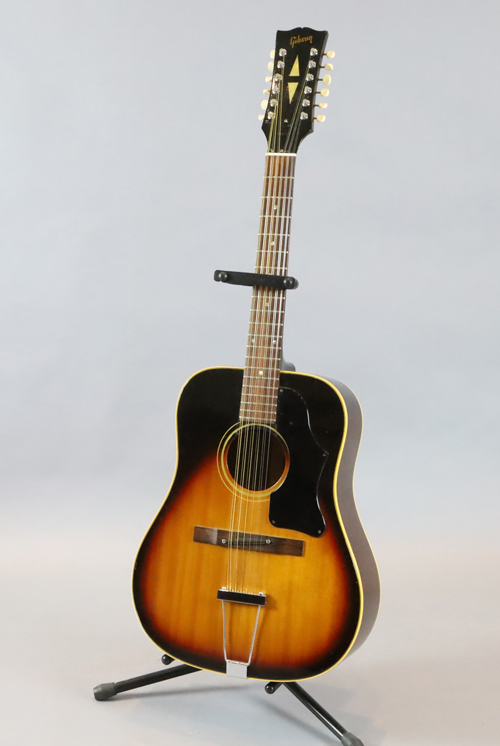 A fabulous jazz sounding model, with hollow body and archtop, which comes with a Gibson USA hardcase with lining, that will add to the value of the piece. Listen to the sound of the Gibson ES-175 guitar. 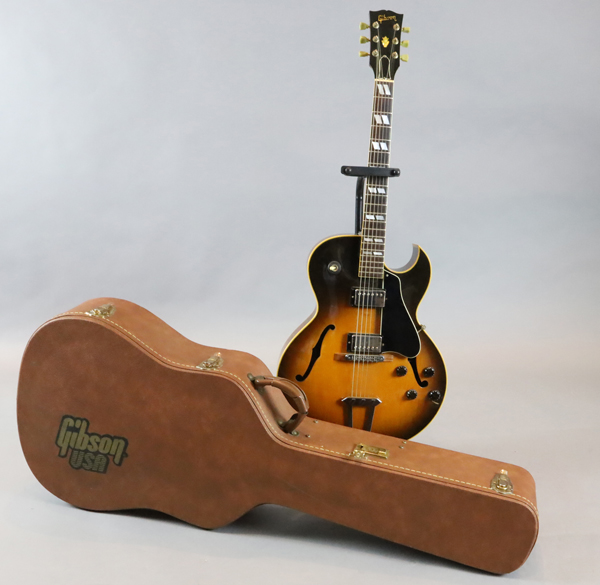 A normal six string guitar that plays like a sitar! Producing a truly unique sound, this will be a snapped up by a buyer with a love for something different - as with all the other instruments, it produces a stunning sound. Listen to the sound of the Rogue STR-1 Sitar. 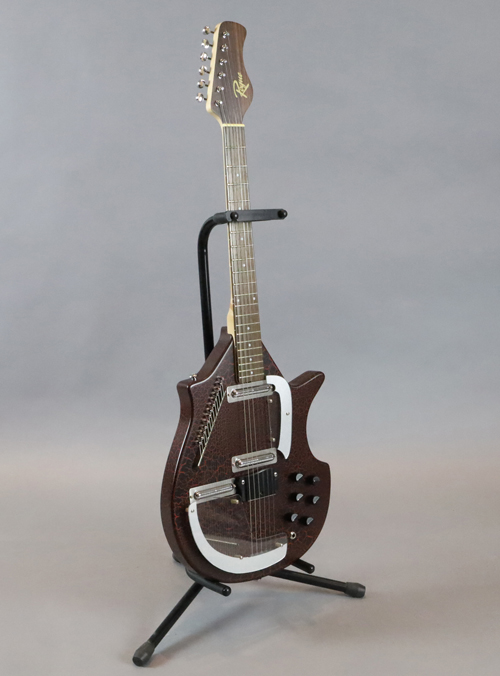 There we have it - a fabulous collection of musical treats to keep everyone happy. See you at the start of June for what promises to be a fantastic sale.