Unpublished original photos of The Beatles & The Rolling Stones

Original Beatles and Rolling Stones photograph collections by photographer Robin Lloyd to be offered for auction in our Spring Sale along with two complete sets of autographs.

Robin Lloyd's photos are a really unique find. They capture the youthful effervescence of The Beatles and The Rolling Stones at a point in which they were already stars, but had yet to achieve worldwide recognition and could still be found on the regional touring circuit. The well is running dry for original photos from this era, and those that do surface rarely include the backstage access granted to a young Mr. Lloyd and his Rolleiflex, an achievement which required no small amount of youthful cunning! The images of a spritely Jagger and Richards penning lyrics backstage, Brian Jones in his pomp or The Beatles playing live aside a silhouetted policeman's helmet are all iconic British images and we're lucky to be able to present them for auction.

“I took my first photograph way back in 1953 with a Kodak Brownie Box camera and ever since then I have - almost obsessively - snapped away at anything in sight. Rather pompously I called myself ‘The Robin Lloyd Photographic Studio’ and in that guise I managed to wangle myself into various clubs, theatres and cinemas when, in the early ’60’s, the British music scene was beginning to burgeon. In particular, at the height of Beatlemania, I took pictures backstage at the Exeter Odeon of the Fab Four and later that evening their on-stage performance. Thirteen months later I covered one of the Beatles Christmas Shows at Hammersmith Odeon, taking pictures outside of the fans and inside of the audience and the performance itself. In February 1964 I inveigled my way backstage at the Guildford Odeon for The Rolling Stones Tour Show where I photographed all the performers, including all five members of the (original) Stones in their dressing room which, on a later occasion, I got each of them to autograph. Other well known performers I photographed in their prime included Eric Burdon and The Animals, The Spencer Davis Group with Stevie Winwood and The Nashville Teens"

Lots 75, 76 and 79 are being auctioned in negative form along with exclusive worldwide copyright.

For more details please email us at: clientservices@gorringes.co.uk or phone us on 01273 472503 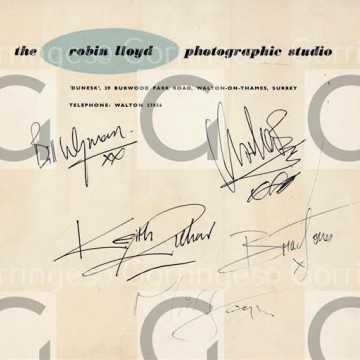